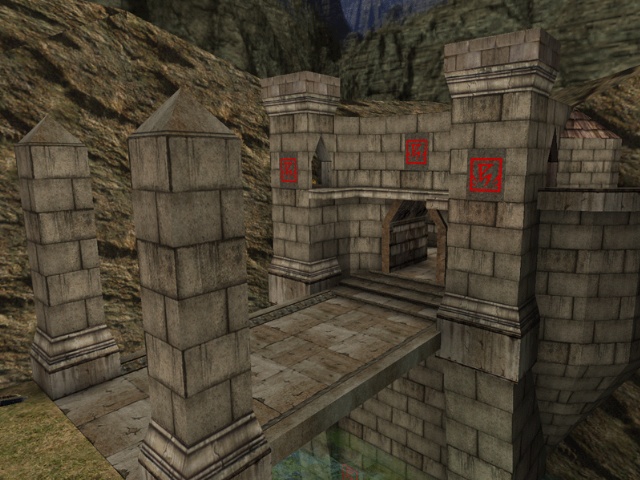 In an attempt recreate the brutal battles of medieval Earth history, the Liandri Organization acquired the rights to hold a Capture The Flag tournament in the rugged highlands of Scotland. Deep canyons, waterways, caves and open plateaus separate the two team bases, making Conquest a challenge for even the best teams.

CTF-Conquest was born out of the impression I had that there weren't many CTF maps set in an outdoors environment. At the same time, I wanted to create a map that promoted team-based strategy. It strikes me that CTF maps that include a tight playing space allow the player to attack the opposing base and succeed as an individual. Whereas more open maps require a squad approach to win by virtue of the fact that a player needs backup to cross open areas. Hence CTF-Conquest is largely an outdoors map, where to breach the opposition's castle successfully, you will need someone to 'cover' you.

There are multiple paths between bases, and two entrances into each castle. Both teams will need to consider the placement their defending players carefully in order to protect their flag effectively.

Start getting that team together, define some roles and see if you can Capture The Flag.