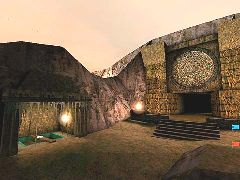 CTF-ACAM is an old Mayan temple set in the lower Yucatan in what was once Belize. It's supporting city is located near the Xacotl River. It was once a minor center for the Mayan god of Water, Kukulkan, and was a relatively small sanctuary. In 1041 by Wester Calenders, a prophecy was made that when KuKulkan returned he must be recieved with the utmost benevolence or the temple would flow with the blood of it's inhabitants. Late in the year of 2012, Kukulkan returned to an abandoned temple overrun by plant growth and "deposits". His people were gone and his sanctuary desecrated. To satisfy his rage he consumed the life force of all of the nearby native tribes. He used there force to renew the temple and used their blood to fill the now empty springs. Eventually Western media caught onto this genocide, and the slaughter became headline news across the world. Kukulkan fled back to the water with the encroachment of these foreigners. The temple was put on reservation and left completely alone for hundreds of years. (continued in readme)