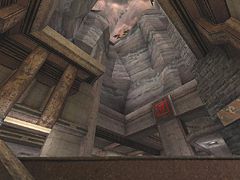 This map was actually started at the conclusion of the 03 school year, and then work was also done last summer, when I was also fiddling with static meshes and terrain stuff for UT2004. Though neither amounted to anything at the time despite King Mango's prodding. So, obviously Atropos has changed quite a bit since it was first started. A screenshot from the original texturing is included. As you can see I was going for this skaarj/richrig blend that became overdone with the release of Operation Na Pali, and I felt original textures would be stronger. The layout also used to run north-south instead of east-west as it does now. Not that I redid any of it, but I didn't get to it initially. The old architecture from 2 years ago is the entire basement area, the purple room, pulse gun room through the flagroom. About a third of it was done then. So the only major new parts are the spawn hallway with the flak cannon and the Sniper rifle room, and of course all the 3dsmax terrain brushes.