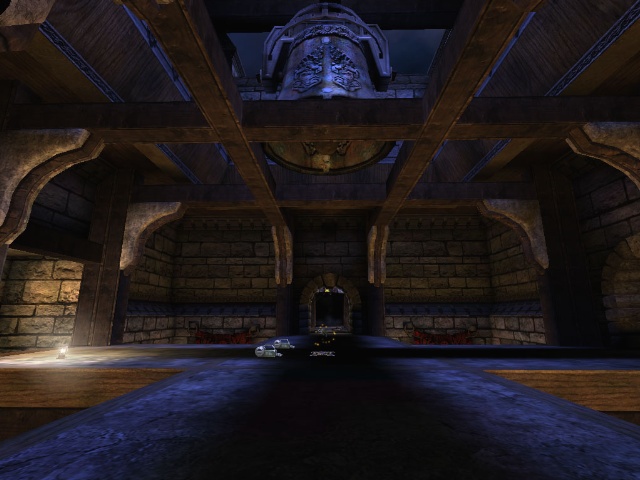 A semi-medium sized map set in a medieval castle whose haunting hallways and embattlements will have you cringing with each erie sound. Filled with plenty of triple-axis action, powerups, weapons, ammo, and escape routes...as no doubt you will need them.

This project started when a fellow clansman, HTM~Freak, asked if I could fix the problem with players getting hung underneath the large lift making it easy for them to be killed. I emailed the author, James "Axeman" Scott and asked for his permission to do so. He graciously agreed and gave me permission to make any necessary changes. I then decided that while editing the map to look for any other reasons to make any revisions. Along with some minor changes I added over 400 mesh blocking volumes to further enhance the optimization of the map. You will be hard pressed to "see" any of these changes. This revised map remains nearly exactly the same as the original.

Kudos to James "Axeman" Scott for the UT04 remake and of course to Peter "Clay" Nederlof for the UT99 original version of this map. Without their hard work and involvement in the UT mapmaking community none of what I have done would have been possible.

Also a special thanks to HTM~Freak, and all the other beta testers, too numerous to mention, for their time and efforts.