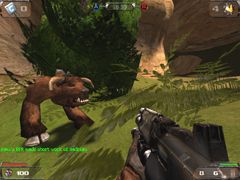 For use with Shattered Oasis (www.shatteredoasis.jolt.co.uk), a UT2004 total conversion.

Deep in the foot hills of the Black Rock mountain range, an unspoilt paradise is about to run red with blood. Having discovered an Oasis in the middle of a dry barren mountain range, neither the Compounders or Variants are willing to back down. Control of the Oasis would ensure a plentiful water supply for the victor.

SODET-Oasis is a semi-mirrored map, that is to say that it is not fully symetrical on either side. Despite the basic pathways remaining roughly the same. The map will easily hold anywhere between 16-32 players. When playing offline 32 bots are recommended for maximum carnage!

Performance will vary, but a reasonable PC should manage to pull down 40-50 frames per second. SODET-Oasis was tested using an XP2800, 1.5GB RAM & a Geforce FX 5600. Overall this map has taken roughly one month to complete from start to finish. I worked on the map and and off, approximately 10-12 hours per week, sometimes more, sometimes less. During this time the map has been rebuilt at least twice.

This is version 1.1 of SODET-Oasis. Changes following the initial release include: