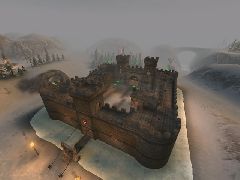 Ahebban is an old Anglo-Saxon word meaning "To wage war", and when war is waged in this medieval landscape only the most courageous of warriors will be victorious.

Ahebban has castles as bases with 2 close first nodes. Some nodes are in caves that are linked, but can be attacked from above, up front or via a mystical cave. There is a central node surrounded by a Stonehenge which makes for some interesting fighting. Default node setup lends itself for fierce battles and stunning turnovers.

The map has been thoroughly play tested with 32 players and all known bugs removed, tweaks implemented. The Titan Onslaught regulars love it so much that they think it would hold its own in a MSU contest. And I know you'll love it too.