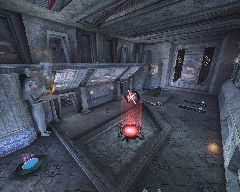 Thousands of years ago, two pharaohs and their immediate families were buried in facing tombs on opposite sides of a small lake in the Uallyr valley. Over centuries the worlds temperature dropped quickly, the lake froze over and the stone of the tombs turned blue as a thin layer of frost spread over it. At sunset the ancient torches are relit for combatants fighting man against man - without vehicles, in one of the tournaments oldest arenas.

-I haven’t included any vehicles, map is too small for them, so the gameplay is different than regular onslaught, more similar to deathmatch.

© 2023 Mapraider.   All rights reserved.   Duplication in part or whole is strictly prohibited.