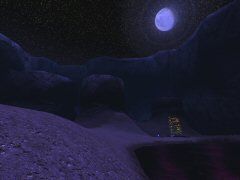 When this area was first discovered, it seemed lifeless and harmless. That first point is definately true, but that last one became known the hard way after two field-analysts accidentally got dissolved in one of the dark pools. The first step was taken to make this area an arena.

NOTE: this was a testmap that became more than just a testmap. It's also small enough to play a 1 on 1, without having to look for each other for hours.