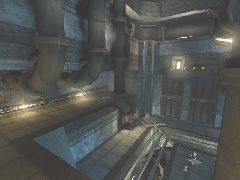 After the great success of Rankin, the audience wanted more industrial maps. So a famous architect was hired to construct a new Arena. 2 years later, the constructions on the planet AV-79 had to be canceled because of problems with instable ground. The new place, where the Arena should be built, was the neighbour planet AV-70. This planet was a lot hotter, so there had to be cooling devices installed that were not planed by the architect. After 3 years, the Arena was finished at last and could be opened for the tournament.