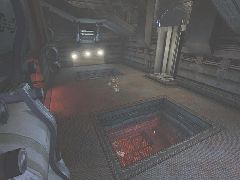 The late Chancellor Rah'zor ruled his empire ruthlessly and savagely. Those who opposed his cruel leadership found themselves here. The screams that haunt the complex tell of the murder and torture Rah'zor's dissenters endured. The recent investment by the Liandri Corporation in the mad Chancellor's factory of death will ensure his bloody legacy continues.

Constructed mostly through Spring Break 2004, Axlegear derives from a layout I've had in mind for several weeks. It sat on the backburner waiting for the release of UT2004. Axlegear tends to be vertically oriented with lots of z-action. I find it quite enjoyable, and I hope you will too!