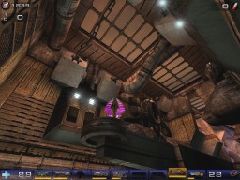 "One of the few remaining liquid plasma relay stations left on Mars, the Raize facility was converted to tournament use by the Liandri corp after an active volcanoe was discovered near the now abandoned city. Due to its instability it has become a favourite of bookies and gamblers wishing to bet on total destruction of the arena. It is for this reason also that it is favored for 1on1 grudge matches."

Um, yes I know its another industrial lava map but you might like it for !@#$%s and giggles - anyhow I havnt mapped since early ut2003 days so im a bit rusty. Anyhow, enjoy!