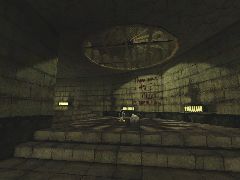 Tournament officials were invited to the town of Silent Hill by an anonymous contact to negotiate terms for opening a new arena. After several weeks passed without word from those officials, a team was sent to find them. And they did find the missing officials... Hanging from chains and twitching spasmodically in a twisted underground nightmare. The location was accepted as an arena, but even the most hardened gladiators shiver at the thought of fighting in Silent Hell.

This map was inspired by the survival horror game series Silent Hill. I adopted many elements of the series' visual style and integrated those with some of my own. The result is a gritty, dark, atmospheric deathmatch level.