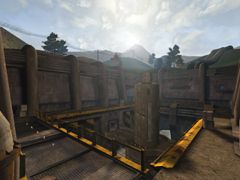 Hydro-power dams have proven to be a favoured battle place in the tournaments. Now here's the ultimate one - a previously undiscovered piece of antiquity, nestled in the middle of a beautiful, rolling valley. Now revived, no longer is it the harmless creator of power... But the perfect CTF killing ground.

First of all, as there's often some confusion - this is NOT a remake of Hydro 16 - some UT1 players might vaguely recognise the layout - it was based on a UT1 map I did, CTF-Hydro32 (which was intended to be a "sequel" to Clawfist's awesome Hydro16). I took the feedback from that and improved upon the original layout, and put up a BSP layout version for testing. Thanks to some guys at UP, I got enough feedback to let me make a few tweaks and get started on the real map. Quite a way into the actual development, I realized it's actually quite a behemoth of a level - quite a few unique rooms and such... But with a few late nights and a few *cough* sick days *cough*, I was able to chisel my way through it in a few weeks. To be honest, unlike a lot of my other 2k3/2k4 maps, I'm very happy with how this one turned out. It looks decent, plays decent, and I was also able to get the bots to use the map almost exactly how I wanted them to! I was going for a more "realistic" than usual look - it still looks "Unreal" to an extent but the lighting was meant to simulate real lighting a bit more, kinda like HL2 with it's radiosity and such. Hopefully the map should cater for the both the casual and the competitive players. Have fun! :)