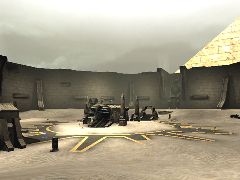 Built in ancient Egypt for the sole purpose of determining the fiercest, most brutal and prominent warrior to become the new servant of Ra.

This Arena was meant to be destroyed after the competition finale but was buried instead...The whereabouts never discovered until recent excavations stumbled upon the almost pristine arena.

Now, uncovered after centuries, The Arena is again open to claim the lives of more arena fighters.