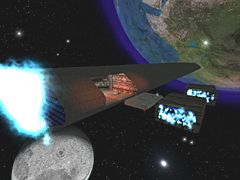 A re-creation of a recent near catastrophe. A freighter ship containing valuable cargo was hijacked in deep-space and its course was adjusted to send it careening towards earth, with all of its precious and highly-explosive cargo. With only a little more than an hour to react, it was decided that a special ops team would fly up along side the freighter and board it via the cargo bay. Then, the team would move through the freighter, input new coordinates at the docks, and complete the manual override at the bridge. This task was made exceptionally hard due to the freighter's emergency onboard defenses now being used against the special ops team.

Author's Comments: Has intro, but no voice acting as of yet. Will get it in in at most a week, but right now I need all the feedback I can get about the map so I'll have time to fix all the issues.