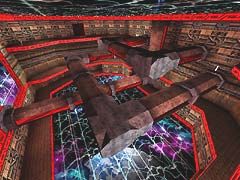 It's got low gravity, low friction and it's an arena. This pretty much sums it up in a nutshell.

Now for those of you interested in a little more detail: This map actually has a purpose aside from hopefully being fun to play. I designed this map to help me improve my aim and reaction times. The combination of low gravity and friction keeps you constantly moving with enemies both above and below you. Death can come from any where. Above you, below you, front or behind so you have to stay sharp if you want to survive. Has it helped my performance? So far yes (just a little bit I'll admit).

As for the map itself, you spawn in a room that has only 2 weapons and a full load of ammo for each and after grabbing your gear you're teleported into the main combat arena. This is to intentionally limit your choice of weapons when entering the arena. Each spawn point has a different pair of weapons so you will eventually cycle through the entire range. There is very little ammo in the arena but don't worry you can usually pick up plenty of new weapons and ammo from fragged players. There is some health and armor but not much as well so I expect your life span will be somewhat limited (at adept and 6 bots I can only last a couple of minutes).

The map itself consists of two mirror image arenas floating in space (one red and one green) separated by a full height hallway and connected to each other by two doorways at floor level and two small connecting hallways running the length of the two arenas at the ceiling level. The arenas themselves consist of a large fairly rectangular three-story room with a series of pipes that form a sort of grid pattern that runs parallel to the floor. The sole purpose of the pipes are to give you something to walk on and to obstruct you position from the other players. [continued in readme]