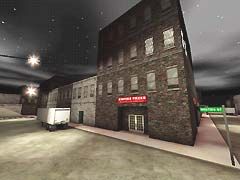 This map is based on the Unreal map "DMDowntown" by Angelheart. It has been an inspiration to me from the first minute I played it. It is one of the most amazing maps created for Unreal. Few maps have such depth of detail, and most of those that do were created by Angelheart.

This map is not a copy of the original, and is not intended to try to match the original in raw detail. Nor is it meant to be compared to Downtown. Downtown ran rather slow. My idea is to make a faster version, and to make the map more connected.

To give the map a freshness I've created about 90% of the textures, and added new music.

I strongly recommend this map to be played with one of the real world mods: Tactical Operations, or Infiltration. TacOp has become my favorite. It's guns sound fantastic, and are not as bloody accurate in the bot's hands, creating a more heroic game.