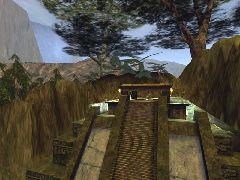 From the deepest realms of Azyan, the lost temple of the Water God Chalchiuhtlicue was thought to be lost forever, its citizens scattered to the winds. Years of untamed growth had caused to hide the temple from sight. But one woman, Ariana, believed that the temple still existed within Azyan, even while the rest of her people had given up the search for their past and a lost way of life. Ariana's quest took 12 hard years from her life - years that made her stronger, smarter, faster and able to tackle anything she encountered. And when she and her small group of believers laid sight of the deserted temple brought tears to her eyes. But even though she was the first in 679 years to view the temple once again, her happiness was short-lived. Her people's enemies - those that had first committed the genocidal attrocities that had killed everyone at the temple - had learned of her quest, and were coming to remove her people forever from the world.