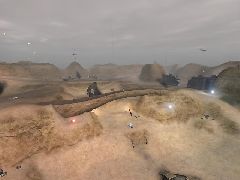 Liandri thought it had found the perfect tournament site...until a war broke out! Who would have thought the perfect field could get even better? Watch out for land mines and falling bombs. And don't forget to watch out for your enemies!

The design/flow of this map is one that works because of this unique game type. The bases are mirrored over one axis instead of two, as is the case in most mirror style CTF maps. The two gates are on the same side of the map, while the bomb spawns on the opposite side. The terrain is tiered to allow play to progress gradually up to the top level so that the entire map is used as teams exchange possession.

I did this because I feel this plays well for bombing run. This placement would probably not work well as a CTF map, because the game would lack that initial sprint to the lower tier of the map. Additionally, the tight route between the two gates means that if possession keeps changing, the game is less likely to arrive at an impasse, as someone will eventually take advantage of the shortened field and manage a score.