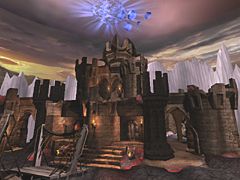 Two worlds collide, leading to mass desturction and desolation of a kingdom once rules by the mighty Titans. The Unreal factions arrive at this hostile realm and prepare to do battle for the control of this legendary arena. Once again, the battlefield is set for War!

This is a level that I created for Unreal Tournament 2003. It is entirely original in its design and concept. In fact, experienced UnrealEditor users may notice the heavy use of pre-existing static meshes from the packages available with the retail version. This was my intention. It seemed challenging to create a new world given the limitations of pre-existing meshes, and makes for a much smaller file (less load time for the level). This level supports bots, but because of its complexity, bot usage should be minimized if not eliminated. I truly constructed this level with the human player in mind, even though a modest A.I was added.