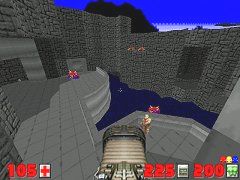 Doom2 SP wad containing 3 SP maps by the above authors. The project originally started out as a "retro" mapping project, I.e. For a large group of quake mappers to each make a doom map and then combine them to a megawad. Sadly after the initial enthusiasm of dozens of mappers only 3 people actually came up with a map and the result is this wad. Rather than letting the project die or waiting forever, we decided to release it anyway.

The result is 3 very different maps:

- map01 - by Aardappel, Doom2 style outside affair meant to be played with the chainsaw only