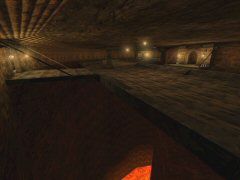 After some archeoligists found ancient temples deep under the surface of Na Pali, they immediantly began invenstigating and excavating it. Short after Liandri found out, they made a deal with the archeoligists, they will get lots of money and will shut up about the new found artifact. The archeoligists would have 49% shares in the artifact. Liandri immediately transformed the huge artifact in a deadly Death Match arena. They called it Magmarena, due to the hot magma flowing below and the natural arena shaped cave. The architects still unknown, but Liandri doesn't care about ancient history.