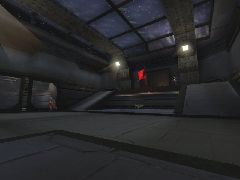 Though not my first release, this is actually my first map. I started it several months ago, but towards the end, I ran into a block and wasn't sure how to finish it. Thus it sat collecting dust until I finally decided to add the last few details and release it.

This is a very large CTF map, good for 16 players, give or take a few. Its overall layout is somewhat similar to that of CTF-Noxion16, but considerably larger. It may take some time to learn the layout. You're definitely going to want your translocator handy; in addition to helping traverse the map quickly, the translocator will get you to several pickups that are difficult or impossible to reach without it.

There are some BSP issues (some rather conspicuous) I couldn't resolve, partly due to my inexperience when I constructed the vast majority of the geometry, and partly due to the simple fact that it's a very complex map -- more than 4,000 brushes. Also, the poly count gets into the 400-500 range in a couple of places, so old hardware will likely complain a bit.

All in all, I think it's decent for what it is -- a first effort -- but it's nothing too special, so don't get your hopes up too high. :)