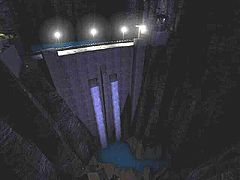 This is an improved version of AS-Dam relased more than year ago in Poland. After this year I changed what was annoying me. I've fixed some bugs, added lensflares to lights (not every), remade some things from the beginning. I've also added a secret (it's located near the explosive barrel, there's only one on the map so if you find it you'll know that the secret is near).

One of the most importaint things is that now there's only one bulletbox for sniper rifle on the locker in defender's spawnroom. It's too high to jump for it so you'll have to make a hammerjump to grab it. I've made it this way because it was to easy to defend when sniping. Now you have only 8 bullets + eventually 10 (but you loose health when making a hammerjump:P) and then you should go to the ground and fight there.

Bots should work well, although they don't use the lift to get back near 2nd gate when they fall from the roof. Unfortunately I don't know how to make them go well.

I also wanted to add a truck standing on the dam. There was even one made by LeszMan but when I put it in the map I got terrible slowdowns.