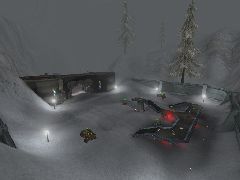 After the tragic deaths of 12 teenage boys and girls at Mount Shasta Ski Park, the Liandri Corporation decided that Shasta would be a great place to host a not very popular style of this bloodsport. After a few months of shimmying up this place, it was hit by a giagantic snow storm which covered most of the bases, destroyed the middle area, and sparked thought into the hearts of the corporations construction workers. They desided to build an underground tunnel to add what the monsterous blizzard destroyed in its process.