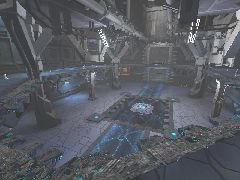 Nowhere to run, nowhere to hide deathmatch up close and personal. After the popularity of the Ascension Rites exhibition tournaments, Liandri Co. Contracted the Sith renvators to add a new spin to a fan favorite.

A re-textured and slightly changed version of Gae, originally by James Schmaltz.

I made this kinda for personal use. My favorite map. I used to play it on UC and it had slight diferences, like adrenaline and health vials. Also due to weapon affinites in that game it made it possible to have more weapons than just the Lightning Gun and Rocket Launcher. So the floor level pick-ups were changed to Flack Cannon and Shock Rifle, giving 4 total weapons. Lightning Gun and Rockets still the predominant weapons though. Also contains Super Adren by Flying Porcupine