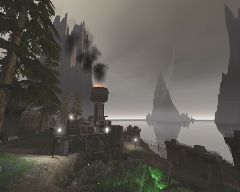 When humans had first begun to spread across the galaxy like a swarming plauge, the crude science of terreforming otherwise inhospitable planets was a huge industry. In the race to come up with a quick solution, the GAIA factory, also known as a mega-plant, was born. These factorys would use the air and soil as a medium to produce the life giving materials found on Earth. Water, air, and every other element was produced to create life where none was thought possible. In a rather bad turn of events, it was discovered that attempting to shut down the GAIA stations would result in an apocolyptic explosion however, and the mega plants were forced to run 24 hours a day, 7 days a week, endlessly producing a weather system that, in the end, almost remained just as catastrophic. Entire planets soon began to flood, or worse, fall off their rotational paths and fall abysmally to their doom into the nearest sun. Only one planet was saved from such a fate, because only one of the GAIA stations had been built on it, keeping the effects to a minimum. Although the planet has suffered sever flooding due to constant rainfall, and most of the land is now eroded away, there still exists few small islands and of course, the mega plant itself. The people behind the endeavor went into hiding, nobody knows where, or who even had come up with the idea in the first place anymore, basically putting all of the mega plants out of bussiness. The last one was taken over by the tournaments, since obviously, nobody else would even go near the place.