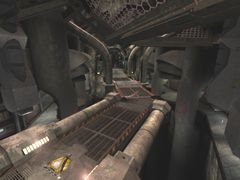 In the early 22nd century, humans began exploring the edges of the second quadrant. In their never ending search for Dylithium, fuel for their AntimatterInjectionWarpEngines, they completely drained and almost destroyed quadrant 1. On a moon orbiting a class Alpha planet, the crew of the Panodra Star discovered an incredible amount of Dyalith, The raw material from which Dylithium is made.

So, they build a Dyalith refinery and called it Nufactor. Not long after producing the first results the crew discovered they where not alone.

A highly advanced alien race suddenly emerged from the depths of space and captured the crew to use them in their sick and deathly game: UT2k4. Now the people of the Pandora Star are cursed to spend their entire live capturing other prisoners flags and respawn eternally for the amusement of the Tokk'hies, as the advanced alien race call themselves.