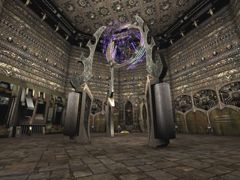 "Hit the jumppad to launch yourself up to the ball. If you grab the ball, head to EITHER side of the arena to shoot at the elevated goal (you cannot run the ball through the goal under standard conditions, but you can shoot at either side). Time your shot carefully though, or the rotating Goal Retainer (GORE) will kick your shot away. If your opponent has the ball, kill him/her before they can get a shot off, and they'll drop it. They won't be gone long though, as they'll respawn in the face off area and be firing cannon balls at you in no time. For those of you going for the slam dunk w/ Low-Gravity and Quad-Jump mutators enabled, be warned: The GORE is only "mostly" harmless... Mostly..."