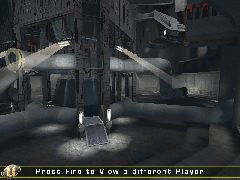 Gyral Computer Core - An electronic nightmare, embedded in a twisting maze of pipes and cables. The GCC facility resembles a mayor communications hub and research data base in interstellar hypercom informations interchange procedures, the exact location of the complex is one of the best kept secrets though. At max capacity the mainframe is capable of approximately 3.9 Terraquot of simultan mathematic operations per second, which is a limit that was never reached as of yet. Due to the fact that the mothercore consists entirely of ultracooled, superconducting metallic hydrogen, it is virtually indestructible and so Liandri was allowed to hold a special anniversary tournament in this one of a kind arena... (Re-Uploaded due to missing screenshot)