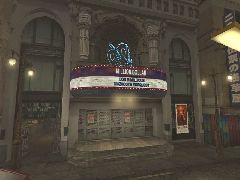 This map is based on the Movie Blade Runner.

Fans (like me) will find all their favorite locations, re-interpreted by me, dotted around the map.

I hope the few scantily clad, badly made, femail static meshes, which are scattered around the level, don't seem to tastless or anything. They just seemed to fit the theme somehow.

The Idea for changing the pickups came very late on, again it seemed like a fun idea. Who wouldn't rather be treated by my new Nurse health packs, than those nice looking, but rather boring blue crosses ;) And a can of Zapp or a big Burger should be all you need to boost that addrenalin :)

With this map,all I am is a synthesizer of ideas, all the creative stuff was done years ago by the team that produced the movie. I watch it quite regularly and am still amazed at how believable the whole things seems.

To check out the whole scene and find out who all these people are go directly to http://www.bladezone.com/ which is the best Blade Runner site out there, and from where I picked up a lot of great source material and inspiration.

A few of the very nice wall textures were taken from the game Mafia, which is IMHO the best looking, and playing, realism based game around at the moment. I've used a few pieces of the Abbadon hardware mesh set, as they seemed to fit the theme. I've taken textures from all over thw web, but found this place http://www.frenchtextures.com/ to have a lot of useful images.
After having a look around with all the settings set to full (Holy Sh*t) I would usualy go back and set the texture quality to low, then its possible to have a great game :) Although I still get a decent game with everything full on, only one or to slow spots.

Some places aren't pathed. I see this more as a LAN game than a Bot game. The Bots still can't handle tight spaces very well, so the map will probably only come into its own when played against Human opponents.