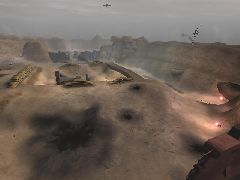 "Liandri thought it had found the perfect tournament site...until a war broke out! Who would have thought the perfect field could get even better? Watch out for land mines and falling bombs. And don't forget to watch out for your enemies!"

I didn't originally think that this map was a good candidate for conversion from Bombing Run. I felt that parts of the map might get ignored. After playing around with flag positioning, and making some modifications to the routes and paths, I think it works pretty well. I think the bots attack and defend better than in the Bombing Run map.

Among the changes to this map are some fixes to the scripting. When playing the BombingRun version online, I noticed that the triggerlights were constantly strobing and that my sound effects were missing. After playing with this, I have concluded that I am unable to achieve these effects in net play, so I now destroy these lights and stop the appropriate triggers except during standalone play. This has improved the FPS of the network game, at the cost of some of my effects, so I guess it's a good trade.