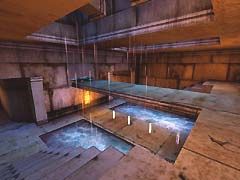 A medium sized deathmatch map for UT with an ancient style atmosphere.

Raiden is my first map for Unreal Tournament. I was striving for an extremely complex and fast layout. One where you could lost in and would have to concentrate to learn your enviroment. You'll find multiple entrances to every room and long, tight hallways where head to head combat is unavoidable. I also was able to include a special weather effect that has not been used in any Unreal/UT deathmatch map. The rain looks great, adds to the atmosphere of the map, and doesn't effect the speed of the game. The bots perform well in the map and will give you a run for your money. This map was tested on a Pentium MMX 300 mhz processor with a Voodoo 2 and it runs fine. I go under the assumption that anything less than this will run a little bit slow and anything higher than the above system will run very well.