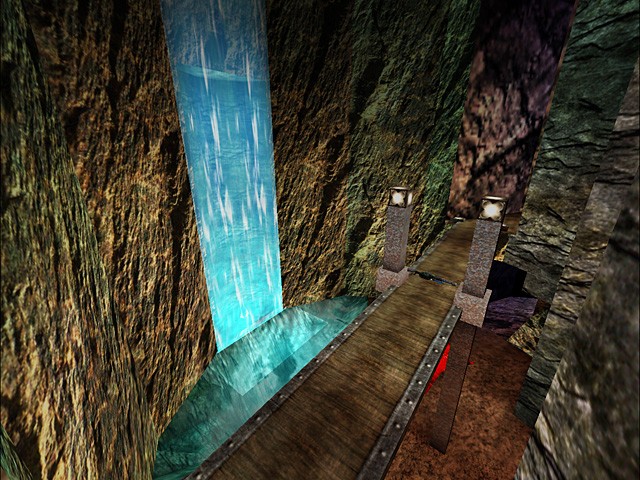 On the other side of NyLeve's Falls is a sister site to Rrajigar Mine called Terra Chorizen. Originally thought to be the 'mother load' of tarydium by the Skaarj, soon into production it was discovered that Rrajigar was the actual site of the real tarydium crystal ore vein. Since much effort had already been put into the new facility (it is difficult to reach) Chorizen was completed and approved operational, but afterwards most personel were shifted to the Rrajigar site.

Shortly after the ISV Kran crashed, the Vortex Rikers crash landed at Rrajigar. Chorizen was deemed a security weakness and the remaining personel were quickly evecuated to Rrajigar to bolster security.

Within hours after the Vortex Rikers crash, prisoners had found the freshly deserted Terra Chorizen facility a welcome resting place on their journeys. We pay homage to their struggles in Deathmatch.

* Do a fly by along the water. If you fall in you'll know where to go to get the lift back into play. Exit the lift to the right or left.

* The bots will do everything and go everywhere. I've seen it.

* The invisibility is on a narrow cliff edge off the Skaarj transporter area and the redeemer is on the opposite side. You might as well get them because if you don't, the bots will. In the computer room, press the button to activate the steam trap to kill anyone going for the shield belt. In the same room is a false wall that has a keg o health.

* I went for the Rrajigar mine look because it's the storyline that I wanted to compliment.

* I apologize if you get stuck in a wall somewhere. Everytime I fixed one thing, something else seemed to go goofy, but it shouldn't be a problem.