The Temple of Dunamis ][ 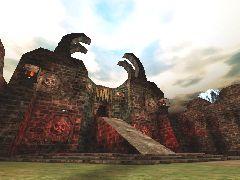 Based losely on the map "Crossfire" for Half-Life.

Dunamis is the Greek word for "power".

The map is in two largish sections. The first area is an ancient style set of buildings designed just for running about whooping bots. The second area is the temple. The temple was built to unleash a holocaust on the players within the first area. By running into the temple the player can run right the way inside and trigger object near to the two windows. The windows are actually remote screens that show the player the action that is happening in the first area. Once the trigger object is set off, energy beams can be seen coming from the statues in the hall behind, the sky goes black and after almost a minute a holocaust is unleashed on area 1 where very little will survive. The players in the map are given a warning before the holocaust occurs and are told to run to the temple where they will be safe. However, they only have a certain amount of time to reach safety as the large door to the temple is slowly closing.

There is 1 secret area in the map which consists of a small chapel which leads to a deadly secret! The secret is found by pushing the book jutting out of the library shelves. The book triggers the trapdoor to open on the other side of the area for a short while.

This second version of DM-Dunamis was updated so that there would be much more bot activity in the temple area. The holocaust happens much more often now!