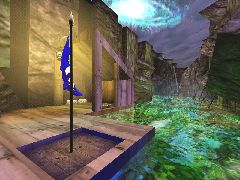 After finishing my work with CTF-Superiority, I decided it was time I made a small CTF map. I wanted it to be something special, but I didn't know how to begin. And then, I found out that the BioRifle is a weapon lacking of tactics (I wonder who on PlanetUnreal wrote such a thing).

That's it! I'll build a map based on the 'personality' of the BioRifle. In what sort of environment would it fit? In an industrial unit? Nope, Terraniux was first. In some swampy pit? Yes! Unreal has no REAL swampy maps, neither does UT. So, I started building a swamplike canyon. 2 bases (well, I think that mentioning this is totaly POINTLESS), one on dry land and the other in a swampy lake, one straight path through the swampy waters (and the Udmg in the middle) and another one through a tunnel. The blue base has the flak cannon, the sniper rifle, the armor, the bkoh and the invisibility while the red base has the shieldbelt, the thigh pads, the ripper and the biorifle. The minigun is in the middle of the tunnel.

Thus, the blue flag is harder to get than the red one, yet she is easier to carry to the red base once a red player gets it. Some ambient sound fx adding to the swampy environment, kick-assers (bots) and one bug that makes a rock surface near the blue base to stretch (?)...

Man, you gotta see it to understand how REAL it makes the map.