DrWho - The Scourge of Skaro 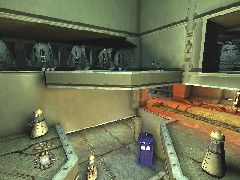 After building their second M.T.F. (Mobile Tournament Facility), the Liandri Corporation was irritated to find out that the facility had been hijacked by the infamous Daleks and transported to their home planet - Skaro. With the Doctor himself turning up too in another attempt to hinder the metal misfits, its up to the Tournament candidates to prove that no tin-pot alien invasion can interupt some serious gaming!

This is essentially a tribute map to DrWho, and as such its been loosely themed around that. In keeping with the flavour of this famous Sci-fi show, I've kept the lighting nice, bright and tacky - just like the show!