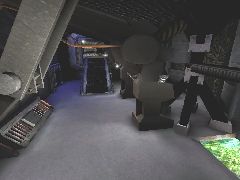 After finishing Niven][ I decided it could be more fun to expand on the idea and make it a more playable level for normal weapon use on multiplayer servers.

The layout is mainly the same but overall the map is roughly double the size. The original way into each base remains, but with the door slowed slightly. The new route is longer but not so cramped, and has super armour and the damage amp amongst other things.

While this map also gives a great game of Instagib CTF, it also plays very well in Normal Weapons too.