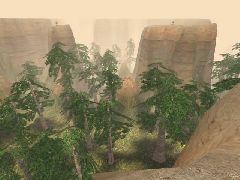 This is a conversion of my CTF map of the same name.

Many natural things are fractal in form, from ferns to rising smoke. Fractals lend themselves perfectly to creating convincing landscapes, and that is what I have attempted with this map. It is created from a Julia set of the famous Mandelbrot set, with a little tweaking to make it more player-friendly.

It looks like a deep canyon, with pillars of rock here and there, the tops of which can be reached with the translocator. The central area is thickly wooded, giving way to clearer space around the bases.

The bots know their way around and are well able to reach the top of the rock pillars (if they are set on a high enough skill level to use the translocator).

Because I created the map with a low ceiling to stop players from getting too high, the standard Ion Cannon could not be placed high enough. To remedy this I did some quick alterations to the code to create a new class (if you want to use it, open the map in the editor and look in IonCannon->SpecialIonCannon). This version does not check for line-of-sight, so I was able to place it outside the subtracted space of the map. The Ion Cannon mesh is in the skybox for visual reference, and displays a little twinkle when the 'real' Ion Cannon is fired :) Because the real Ion Cannon is very, very high above the map, the beam comes down virtually vertical, thus appearing to come from the fake Ion Cannon directly above in the skybox.

The bird sounds were mostly taken from a handy CD of sound-effects from the BBC.

There is a team-coloured firework display whenever someone scores.