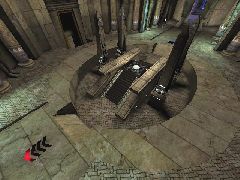 BR-Ankh][ is a remake of and the sequel to my first released UT2003 map, BR-Ankh. I could make a list of changes, but you would be reading for a long time. Rather than simply copy the old BR-Ankh, I started from the ground up - that is why I say it is a sequel. Only the theme and a few areas mirror the original.

Set at night in a windswept egyptian Temple, BR-Ankh][ comes complete with a beautiful outer area, underground catacombs, and two large bases. I have placed new sniper points - on the laps of the huge anubis statues.

The gameplay principle is fairly simple - 2 bases, facing each other. There are, however, 3 ways to get to either goal - straight through the enemy forces aboveground, or sneaking through the 2 seperate catacomb tunnels. The goals are set into the floor, and I must say, they look damn good!

I have made several small nice things on the maps - the goal room lifts work both ways (by use of a pressure pad), the ion cannon fires out of a nice effect in the sky - this you have to see!