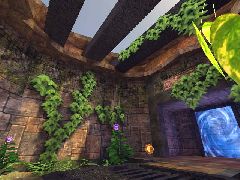 An ancient temple with a landscaping problem :) More of an exercise in modeling and texturing than anything else. The level is a rippoff of DM4 from Quake and was created using all freeware tools (gmax,gimp).

From the readme: "The brothers, "Quake Hero's" some called them. Never before have they fought together so they set out to find the ultimate arena. "this is fun and all" said one of the brothers, "but what I feel when deathmatching isn't as glorious as the stories of ancient battles".

The brothers make an attempt at resurrecting an ancient arena of death but are surprised to see that it's not the same as it was in the book. "Perhaps it was teleported ..." (continued in readme)