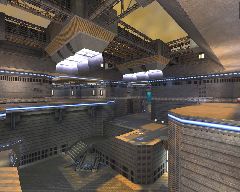 This map pak is a set of deathmatch maps created specifically for people who play on the Burial Grounds Q3A Servers. It's a special group of people, who play with friends for fun. Each map is designed with a 6 - 10 player load in mind, and definitely not intended for competitive play styles or mods, such as CPMA (maybe BGMP2? :)).

Each map contains custom texturing, including the new Burial Grounds logo showcased throughout. There is also a soundtrack for each map, tailored specifically for these maps. We hope you enjoy the tunes, as we may release them in MP3 format soon after this pak is released.

This entire pak was created by members of the http://www.burial-grounds.com community. We felt the best way to make this pak work for it's intended audience, was to let some of the community participate in it's creation. So, along with the mappers and musicians, the beta testers were also selected from Burial Grounds community members. It's really a collective effort by all of Burial Grounds to get this project where it is today!

We hope you all enjoy our efforts. I believe we have put together a set of quality deathmatch maps!

Please see the included README.txt for credits and more info or go here :

*DX says : take the first downloadlink from planetquake3.net it's by far the fastest :-)*