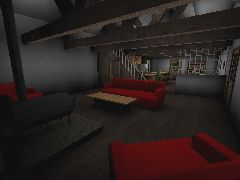 This a very large sniper map. It a also a 'giant size' map, meaning that the player character is in miniature. It has a living room area which is open to a kitchen area with an open loft/bedroom over the kitchen. It also has a bathroom beneath the stairs. There are no false walls in this map. It has many spawn points all over the map to reduce spawn camping. There is at least one spawn point which people have complained leaves them in a dark space which they are unable to leave. This space is in an open box in the kitchen and the one lit area is hard to spot. If you spawn there, be patient and look around. This is an intentional feature. It is my first map in a long while, but I think it turned out pretty well. View more on this map and other Black Sheep maps at www.blacksheepclan.com