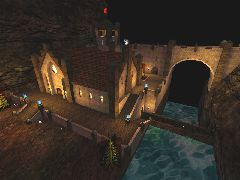 Due to requests from players, I was compelled to port the original KonosusR2 to UT. In the process, I found the original warp tunnels would not work...so I had no choice but to delete them. A lot of retexturing was done outside (boy was I ever unimaginitive the first time around). The mesh trees were removed and replaced with masked texture pine trees...as I wanted to do in the earlier version but did not have the time. Camp coward was removed; I know a lot of people liked this little secret, but it stole away from the gameplay too much. With respect to the bots, they play pretty good but when it comes to water, I've had it up to my eyeballs trying to get the morons to get out before they drown. Despite this annoyance, they still play very well. Also, I added some ambush points for them atop the two towers. The bots also have trouble with the elevators in the tunnels. For better strategic purposes, at least one of these elevators needed to be triggered movers...which is difficult if not impossible to get the bots to use properly. Thus, rather than comprimising the map geometry and design in these areas (just to get the idiot bots to take an infrequent ride on the elevators), I left them the way they were. I hope you enjoy playing Konosus][ as much as I did making it. Thanks for your support.