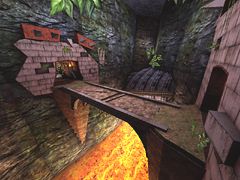 Time Crash is a large sized deathmatch arena. People familar with small, tight maps will certaintly feel ackward here, it's big compared to other maps, providing alot of room to move and millions of senarios of gameplay ( maybe not millions). As stated before, this map is designed for faster PCs. All weapons and items present except the Jump boots and Bio rifle. This map has several settings in one, rusty facility, old ancient shrine areas, outdoor areas, and a cool mine. Suits 8 players to 16 comfortably, and despite the large file load, most of that isn't the map;). There are various hazards and traps scattered about to add to level interaction and gameplay tactices. Some Hazards are secret and hard to find ( see Bonus section). Power-up control in this map is very difficult, since the map is large and the power-ups are spread out, making the game abit more equal at times ( if you suck, your still gonna die though).

Story:In the year 2261, The deep space Discovery ship named "ThunderBird", vanished from long range scans. Emergency tansmissions were recieved some weeks later, they were the ThunderBird's final computer recording data. From the information gathered from the data, it was concluded that the ThunderBird had come in contact with a black hole, and thus destroyed. Rescue teams were unable to retrieve any remains of the vessel, which left the UMS space division standing at the front of worldwide blame for the disaster. Since the ThunderBird was the third ship in the UMS division to fall to peril in deep space, the Division was closed.

And thus the search for the UMS-ThunderBird was ended.

In the year 2284, 8 years before the founding of the Liandri Tournaments, a faint beacon was discovered in the Off Rim sector. A Deep space salvage vessel traced the transmission to a mountainous volcanic world called ... [continued in readme]