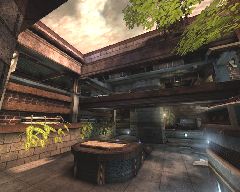 If its weak, either kill it or ignore it. But if it grows broad and heavy it could kill you instead.

This map contains mostly new static meshes (around 100) and textures from Hourence's texturepacks.

The layout was my first priority -- I redid the RL room, and added some "stuff" to some of the rooms to enhance the gameplay. It will take a little while to get really used to the map. I have put a lot of time in the bots, and they can do insane stuff in the map, every liftjump works (though they sometimes use the elevator wrong, but that also depends on the skill level.

As for the visuals, I wanted something strange, though decently industrial/techish. It has a weird unique feeling over it, I hope you like it.

This map will be very heavy, there will be a lot of difference between the high, normal and low detail settings, wich will also result in a difference in the looks of the map. If you want visuals, set it to high, if you want the best fps you can get... Set it to low (though some people see that as cheating...)