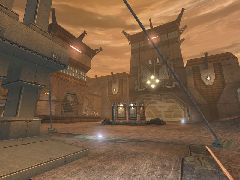 This scenario recreates the Skaarj Invasion of the planet Acatana. The planet, uninhabitable by most lifeforms, had long been the home of a secret group of human scientists, a division of the NEG created with the sole purpose of researching advanced weapons technology. With the surrounding asteroid field and their own defence systems no race had been near the planet for years. That was, until the Skaarj received word of the highly lucrative technology ripe for the taking.

Hoorah I finished it! Fixed a heapload of bugs since Beta. Thanks a lot to everyone who tested it out. Added a new spawn to make it easier for attackers and tweaked a lot of stuff.