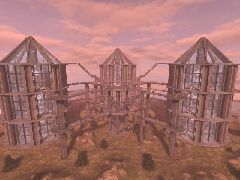 The home world of these rare plants was all but destroyed in a great meteor storm. During the evacuation of a primitive race inhabiting the land, human botanists stumbled upon the strange plants. After a brief inspection, they knew they must take a few with them for further study. After trying many computer controlled environments, they quickly realized just how extra sensitive these plants were. Intent upon keeping them alive, they had to find just the right planet with just the right climate. After a month of searching, they came across a suitable planet not so far from earth. Because of this planets high air pressure, the botanists were forced to quickly constructed a floating platform to keep the plants high up in thinner air. On top this platform they built three towers to house them. The odd shape of these towers was not for looks alone, they were specially built to filter the air and let in just the right amount of wind from just the right directions. Without much funding, the botanists found themselves hard pressed to find enough fuel to keep the platforms afloat. As a last gasp, they concluded to allow for the new popular sport, Bombing Run, to hold tournaments on the platform, if they would pay the fees to keep the place afloat. A deal was quickly struck, and this beautiful place soon became one of the most deadly BR Arenas. Watch your step.

The map is made up of three very large towers containing some extremely rare plant life. These towers are connected by many catwalks and they sit upon an odd platform floating high above a sea of water, way up in the clouds. It has some strange terrain on it, and judging by the way the rocks just end at the edge, it looks as though it was sliced out of a natural landscape and placed on the platform. The terrain is fairly dry, with lots of white rocks breaking through it in certain areas. Where their are no rocks their is dry grass, moss, and a few small pine trees.