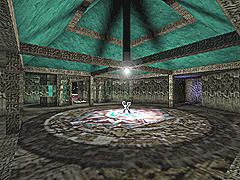 After playing the UT demo I knew I'd be making levels for the final version of the game, and sure enough I did. This is my first level, though certainly not my last. The layout is actually taken from one of my old Decent levels, "Kaffinated". Those of you who played it might recognize the Tent room, though everything else is new. I didn't know what game mode I should design it for, but about half way in the making I decided that this would make a good Domination level, and I think it turned out nicely.

I spent a lot of time optimizing this level and trying to make everything perfect. In fact I spent 6 hours alone just trying to squeeze a few more FPS out of the map. The end result is a bit less decoration, but more playability. Side note: sometimes getting the BSPs right without screwing up your level can be a pain in the neck! Good thing I saved under 2 different files!

Thanks to all of those who's tutorials I've read, especially those at UnrealEd.com. Also thanks to Epic for a great game!