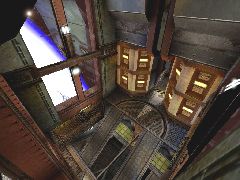 After having been broadcasted world wide by the Liandri Corporation on every television station on Earth, and with skyrocketing ratings, it has come time for the Tournament to branch out into larger (and more profitable) ventures. With the aquirement of an ancient Alien Cargo shipment station, the Liandri Corporation has now gained the ability to broadcast the Tournament to a whole new area of the galaxy, bringing with it higher ratings, more lucrative profits, and most importantly for the fans, one kick-ass new arena. This map requires the SGTech1 texture set from Epic's Bonus Pack #4 for UT.